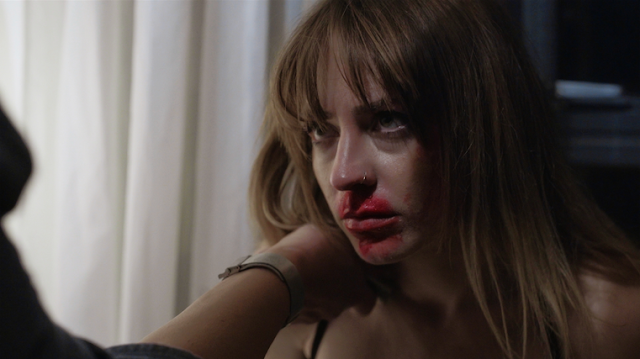 I recently volunteered at a film screening at Spike Island, it was the screening of the most recent film by London based artist Sophie Cundale, ‘After Picasso, God’ a co-commission between Serpentine Galleries and South London Gallery.

“The film sees a woman (played by Cundale) visit a hypnotist to address an unwanted addiction. As part of her cure, objects, people and images are transformed through hypnosis; pain is brought to the surface and removed through analgesia. The title refers to the artist Dora Maar, Picasso’s lover and muse, who after the break-up of their affair, declared: "After Picasso, Only God."”

Talking with a fellow volunteer, Harriet, after the screening on the way home, I found out we both felt uncomfortable at certain points throughout the film. There is a part when Sophie, under the hypnosis of feeling no pain, slowly burns her fingers on the cigarette she is smoking. The scene made me flinch but I could not turn away, it was a powerful scene, which was happening slowly and demonstrated a feeling of torture. It is very impressive how well communicated the feelings are throughout the film.

The voice of the hypnotist was so calm and overpowering, impossible to ignore, it felt controlling and scary. The realness of the scene, and closeness of the camera, really made you feel like you were right there with Sophie, the hypnotist, and all of the characters represented. The introduction of new characters was carefully performed through small movements of the hands with the cigarette, and appliance of make up, along with a change of voice, signifying the character embodiment of Picasso, his lover, and the ‘other woman.’ Even though these characteristic changes to play each role were subtle, it worked, and it was easy to follow the story.

After the film Sophie was encouraged to speak more about her work and I am so glad she did. I liked hearing about the process she went through of forming her ideas into creations, which turned out different from her original plans as things naturally changed along the way. Cundale said everything she films is very much real, for example the woman singing on the bus, was her mum just singing on a real bus journey. The party scene was also real with friends, and a real hypnotist who is also an actor played the hypnotist.

Pointing out that this film is not the first time that pain has been a theme in her work, and it has naturally reoccurred, Sophie’s interest in the subject of pain is continuing to grow and is strongly influencing her next project.

In ‘After Picasso, God,’ Sophie was hypnotised for real as she played the role, and did not feel any pain from the cigarette burn. It’s incredible to hear how Sophie’s work is inspiring her own future project plans, and she is further investigating what happens inside the brain when the sensation of pain is blocked. This particular experience is something Cundale is beginning to explore within boxing, and how boxers fighting in the ring have so much adrenaline that they aren’t susceptible to the feeling of pain. Sophie is training to be a professional boxer and intends to compete in 2017. It is important to Sophie that she communicates the experience as truly as possible, and she feels the only way to do this as accurately as possible, is to experience it herself, and then somehow show the film in a 4x screen experience to authentically make the viewer feel like they are in the boxing ring themselves.

As a volunteer at Spike Island I wanted to volunteer at this screening because I was mainly curious as to how the title of the film ‘After Picasso, God’ and the image on the poster of messed up lipstick could be connected. The opportunity to meet a female film-maker was also something that excited me. Also, since the film industry is still predominantly made up of men (more than any other gender), I am always supportive of more women getting involved in the film making industry.