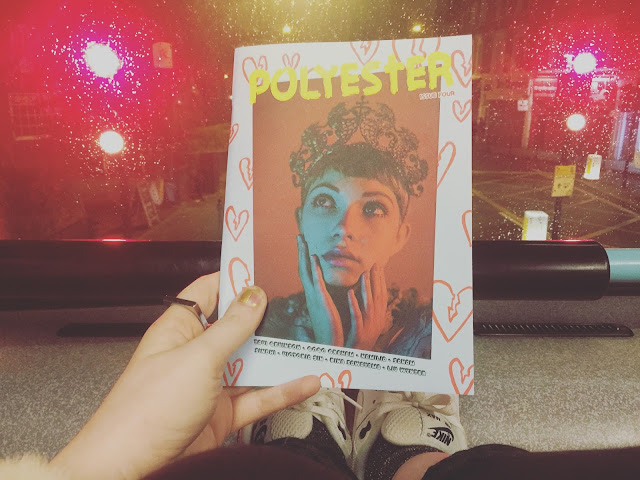 Polyester is a London based zine started a couple of years ago by Ione Gamble. I'm not sure where I first heard about it, I think it was through instagram or Tumblr, in-fact I think it was through Celia Edell's tumblr, Ceedling. Celia is a contributor to the zine in an advice section, I have been following her tumblr since I was younger and probably began to not long after I first came across tumblr. Celia was the first person I actually saw change their hair colour a bunch of times, and made me feel like I could do it too without worrying so much. Youtube videos are a large part of my media consumption, and Celia's youtube video's about stuff including feminism and anxiety are personally encouraging. Celia is from Canada, and I feel that after finding out about Polyester via her online presence, it almost seemed strangely lucky to then discover Polyester is based on home turf in England.

I remember loving so much about Polyester, what stood out to me was the attitude of it and how girls were saying what they thought about stuff and calling out the bullshit talked around femininity in a beautiful way. I was slow on the first issue of the zine, the second issue is the first one i got my hands on, it excited me so much I showed it to my mum and all of my friends. 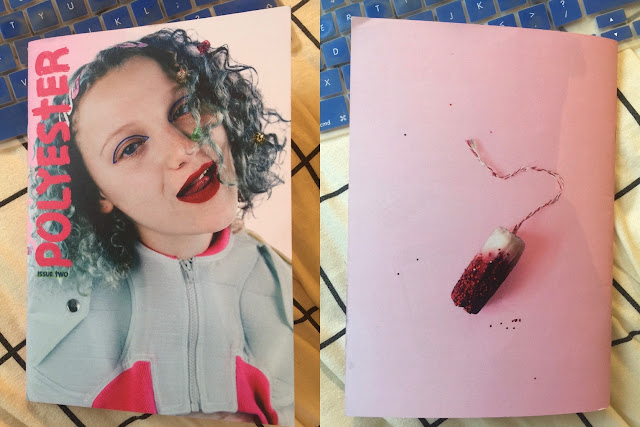 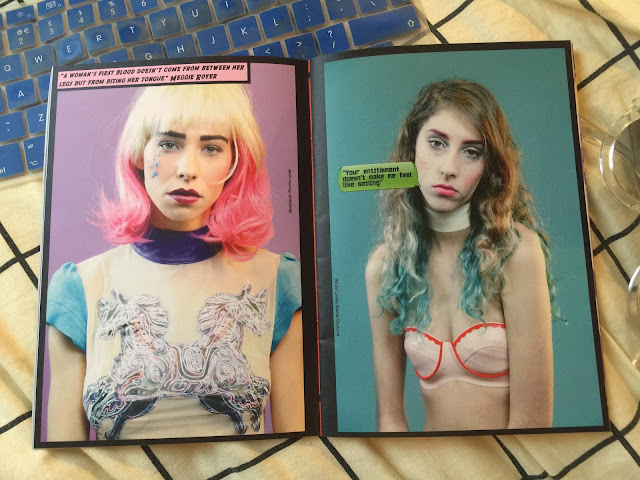 The launch party for issue 4 is the first Polyester event I have been to, after seeing some of the content for this 4th issue, previewed on various Instagram accounts, seeing that so many people I like from the internet were contributors or featured in the zine, Tavi, Taylor, Celia, Liv, I felt even more so that I had to seize the opportunity of going to the launch and supporting the zine. If I still lived in Scotland or Plymouth it would have not have been as available to me to go to the launch in Hackney as it is now I live closer to London, so I couldn't NOT go. I'd also be really sad if there was no more Polyester, and let's face it, it's a fucking miracle Polyester exists with Tory government making creativity/freedom within London so fucking impossible. Tavi Gevinson is featured on one of the covers of the zine, and if you know me you know I'm obsessed with Rookie, created by Tavi. The fact that a London based queer friendly zine had a feature with Tavi got me so excited. This feels important and powerful. So much positivity around youth/queer/creative/internet culture taking up space and fighting to keep it.

On Tuesday 9th Feb, my boss let me finish work early so i could get a bus to London, find my way around Hackney and go to the launch party. I finished work and I had dinner with my friend Katy at her house, and got changed into dungarees, a stripy top and trainers. After a bus and a train, I arrived in Hackney early, walked the wrong direction a couple of times until I eventually found Moth Club. I was totally early so I walked somewhere until I found Hackney library. The door alarm beeped as I went into the library. I sat down near the LGBT section and I heard a guy shout into his phone, "do not stalk me, do not access my files, leave me alone." The library was near to closing time so I headed out the door, the alarms went off as I walked through the barrier, turns out my copy of Tipping the Velvet i got on ebay has a tag inside as it was apparently previously from a library in Yorkshire. Wtf?! Is someone stealing library books from Yorkshire and selling them on ebay for a couple of quid? ... The security guard eventually let me keep it. I was so nervous as it was and this extra attention drawn to myself made me want to go home a little. 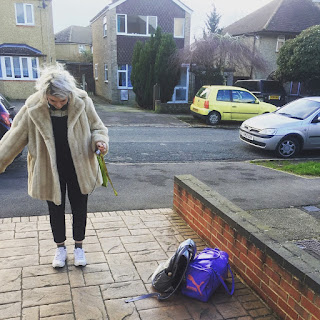 I walked up and back down the road slowly towards Moth Club, it was 8:00pm. Outside I met Ione Gamble and two others smoking cigarettes, they were really lovely and all looked great. Inside I received a stamp on my hand, a little smiley face, and waited until the main room was open. I went through, got a pint of Fosters from the bar, and stood around. Then I met a sweet guy named Daniel, I told him I loved his long silver puffer jacket, it's incredible and he told me he got it in the sale at Harvey Nichols. Daniel is studying fine art at UCL, he showed me some of his art on his phone and it was really cool to hear about his work. I mentioned I was there on my own and so nervous, he was lovely. We got another drink, dancing to My Neck My Back at the bar, I bought a zine just as Daniel's friend arrived. We all went for a dance, it was SO fun, the music was fucking insane. Thank you to the DJ's! ... Missy Elliot, Tatu, Grimes... music I have rarely or never heard outside of my bedroom or my headphones, I was so happy! Dancing and laughing with these cool new friends, getting so hot and holding our huge coats. 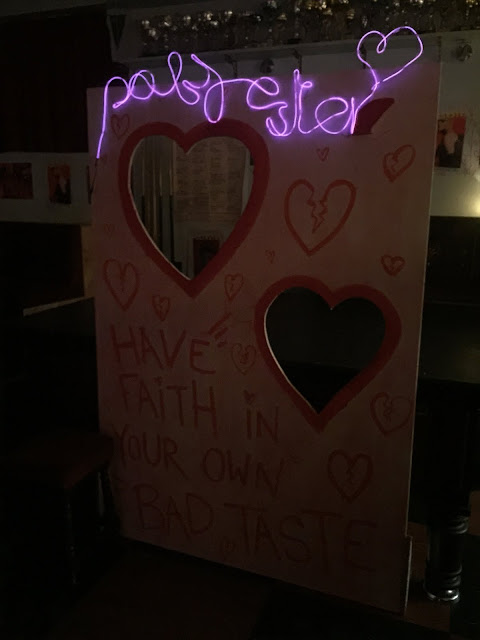 While we were dancing we made friends with a couple of girls from Montreal and Vancouver, Canada, one of them told me that her brother goes to the college that Grimes got kicked out of and I went into fangirl mode for a moment. Amongst the crowd I saw some familiar faces from the internet, that sounds so lame, but whatever. It felt good to be in a cool queer space. 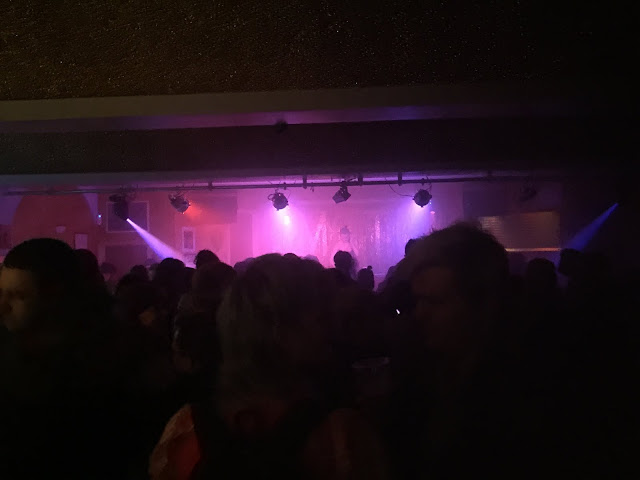 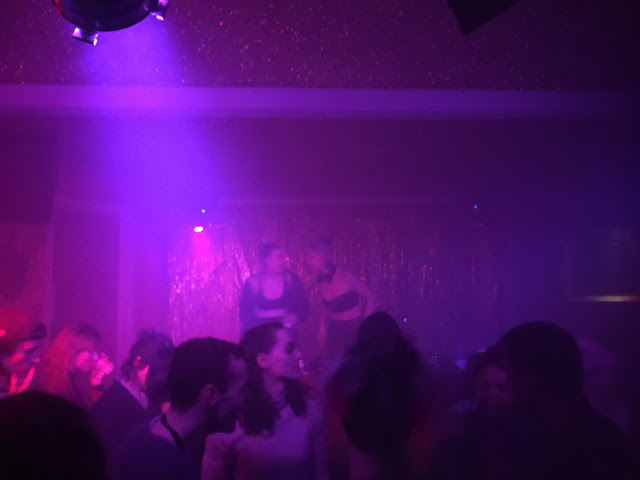 As I mentioned before, the music was brilliant, it was all perfect for the event. Pink lights and glitter gold ceilings to dance under, as if I was actually at the 12th birthday party I wish I had! I loved it! DJ sets by people on stage dancing around having fun, Polyester vibes.


Outside for cigs I met spoken-word artist Liv Wynter, who is featured in the zine, and her friend Alex. I urge you to watch this insane rap battle between Liv Wynter and a guy called Pedro, from last year. I was randomly following Liv on social media and saw the video shared last year. I was blown away by the fearlessness from Liv and I absolutely loved that she stepped into this rap battle "boys club" and completely disarmed anything Pedro said, calling his slams out for being weak and misogynistic. I was happy to see that Liv was going to be a part of Polyester, I feel like she spoke for a lot of people in that rap battle and it's important this is heard and seen. The photos of Liv in Polyester are fucking cool.

Everyone was very polite and fun, I had to leave soon to start heading back to Oxford but I didn't want to. Daniel and Saoirse were both wearing silver jackets, and while we were outside we noticed others wearing silver, randomly we got everyone we could find wearing silver and I took a photo of them, tagged each silver wearing babe on Instagram, it was so lovely to meet more people at the launch. 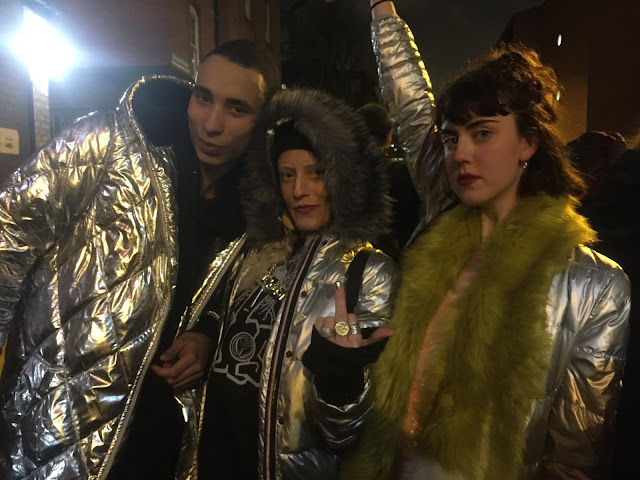 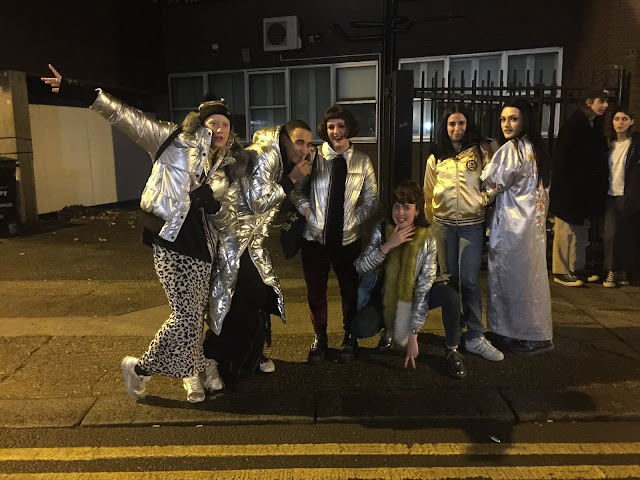 Then we said our goodbye's as my new friends headed home, I went back inside Moth Club to take some more photos and go to the toilet. In the bathroom I met two people pencilling white over their bleached eyebrows and a girl wearing everything completely pink and has pink hair and make up. They looked so good and happy, everyone I met at the party was so friendly and carefree with each-other, and I guess this is because at a Polyester event, people who would come are aware of the zine and what it's about. I took a photo of the table where the zines were being sold, however there weren't many left at this point. 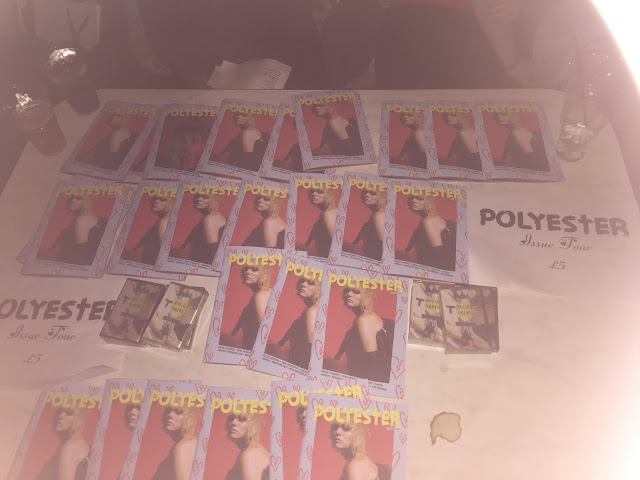 On my way out I passed a few of the people I had met and said good bye. At a bus stop around the corner, I had seen earlier a bus with Marble Arch lit up on the front, I checked the time table and one was due to arrive so I got on it. I needed to go to Marble Arch to get the Oxford Tube back but this bus was taking sooo long, it went to so many places and detours in no direction heading to Marble Arch soon. I should have just got the overground train back to Shephards Bush and went from there. I enjoyed the view around London while I listened to Grimes, Art Angels album, and Rhianna, Anti in my headphones. I craved the songs I heard at Moth Club though, I wish I could have hit replay on my phone for some kind of playlist from the evening.

On the bus I posted a photo of Polyester issue 4 on instagram and tagged Tavi on her face on the cover, Tavi liked it super soon and it made me feel all happy and fangirly! The bus terminated it's journey at Euston station and the driver gave me a transfer ticket, after over an hour on the bus I hadn't made it to Marble Arch at all. This is when I met Diane and Jim who had just been to the theatre and were in a similar situation, I walked with them to catch another bus. Speaking to them they told me they are both retired teachers, Diane was hilarious, she spoke to me about all of the creative stuff her grand-daughters do, and asked me lots of questions about what I want to do in Media and such, I told her I basically want to write about stuff, live in New York and send the occasional tweet complaining about rent and my probably annoying neighbour. 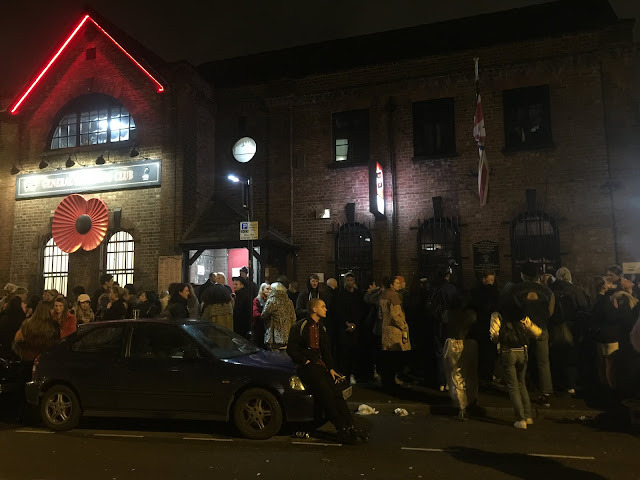 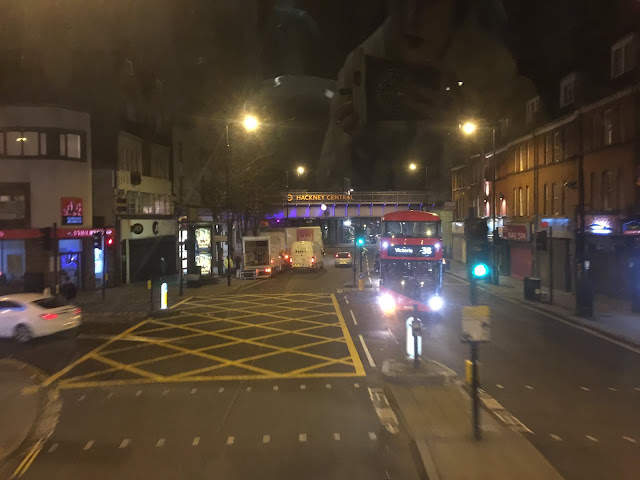 
Jim and Diane are from Southern California, turns out they have spent some time studying in Oxford, and like me they have recently bought tickets to see the new Andy Warhol exhibition that's showing at the Ashmolean museum, so who know's, I might meet them again. They made me laugh a lot and shared random stories. It was 1:00am by the time I got on the Oxford Tube bus, I was bloody freezing, also a car had nearly just hit me at a crossing, despite all of this, I was feeling good. I got home around 3:00am. I'm really happy I went to Hackney for the Polyester 4 launch. I need to take more advantage of living close to London and visit more, if you're reading this and know any cool exhibitions or whatever coming up, hit me up.